I have just had one of the best weekends of my life! What’s more I was able to enjoy it with my OH and 2 boys who seemed to enjoy it at much as me.

We spent the weekend in Henley on Thames camping at the Rewind festival 2011. Having never been to a festival of any kind before it really was a new experience all round. I have never seen so many campers and tents in one place in all my life!!

We decided to go Friday and try to include some of the extras that were on offer before the music filled days………..that way we wouldn’t have to miss any of the bands on Saturday and Sunday.
However, we were late leaving (as organised as ever) and then had to tackle the M25 on a Friday afternoon ( you can see were this is going!!) and then sat in a 5mile tail back just to get onto the camp!!

Once there it was pretty much a free for all. There were already lots and lots…………………and lots of people already pitched and settled ( I was so bloody jealous at that point and mumbling under my breath why we are never that organised!) As we couldn’t get a trolley cart to help with the baggage, the queue was humongous, so we decided to grab the tent and find a pitch and at least get the tent up (which is no easy feat in itself) and that way we could come back for the rest……………………..which really is a lot as we never learn to travel light!

After traipsing all around the world, or so it felt, we eventually found the ‘Family field’ that was already full and not all with families!! We eventually ended up in a field that was closer to the car park and certainly had more room between tents without being squashed in like sardines.
We trooped on and sorted the tent which isn’t easy peasy at the best of times without a hinderer like me helping (but not in a good way). Anyway all hands on deck and it was sorted and I left the boys to ferry the rest of the gear back from the car as I cooked the dinner!!

At that point the plan of enjoying the extras ie: silent disco etc had gone out the window. But at 10pm we thought what the hell- lets go grab a cold beer and have a wander. The kids were up for it with a promise of a go on the amusements!! I’m so glad we did as we came across these peeps:-

Eventually we fell into bed around midnight totally exhausted. But all was great in the morning as we had a lay in and we woke up to a glorious morning. We topped that with a fab cooked breakfast which set us up for the day ahead.

That was before the impending doom of the rain clouds that were quickly approaching. We ended up like this…….

Soooo not funny!!!!
However, someone was definitely looking down on us as the sun eventually came out and we enjoyed a great day with totally fab music. 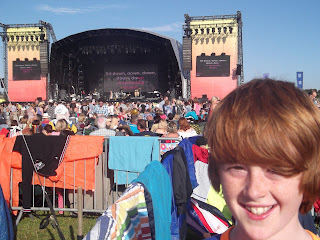 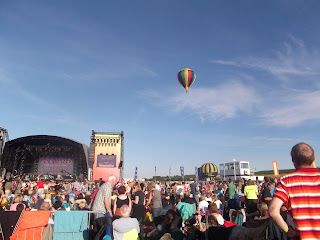 That night finished with Holly Johnson’s rendition of ‘The Power of Love’  and a fireworks display thrown in for good measure.

We trudged back to the camp exhausted and cold and fell into bed pretty much comatosed!!

Sunday…………..and it was all to come again. But we were more organised this time. We packed for all eventualities, coats, ponchos, sun cream, hats, umbrella ( for rain or shine!) and some sneaky Pimms to boot! 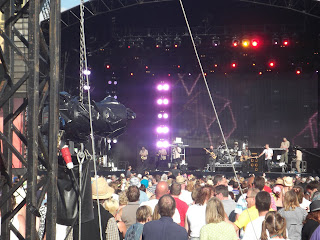 That night finished with The Human League, not my favourite by a long shot and really would have liked Kim Wilde to have finished the night as the crowd completely ‘rocked’ when she was on. as well as The Village People ( don’t laugh) they really had the crowd going, even the security guys up the front were doing the YMCA!!!!!

The boys today were in full festival mode, singing to the crowd karaoke and rocking with their Glo sticks in the evening.

Sadly we trudged back to our tent with the knowledge that we had to be up at 5.30am to pack up and be away early as my youngest was going to be on a course that day ( such bad planning on my part!!). So after not sleeping a wink I was up to this view making tea at 5.30………………………….lovely in an odd sort of way. 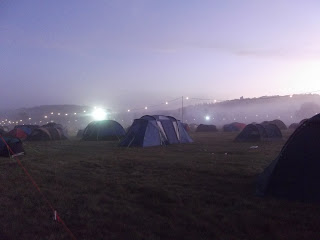 Surprisingly, we were packed and on the road by 8.45am ( how would have thought it) very impressive as it’s no easy feat with two whingy boys to get up and fed and ready!!

However, chatting in the car on the way home and playing one of our 80’s CD’s we asked the boys who they liked:-
13 yr old…………Nik Kershaw!!
Haircut 100!!!
Kim Wilde ( although not sure he should admit that to his friends)
Village People ( definitely not mentioning that one!!!)

They loved the ‘grunge”….. not showering for days, eating cooked breakfasts and staying up very late!!
I thought the ‘grunge’ would be too much for me to bear ( festival camping is a whole other experience than normal camping…………don’t get me started on the porta loos………………….that could really scar you for life!!!)

However, I never knew ‘dirty’ could be soooo much fun!!

Needless to say after a coma style sleep when we got back my shower has never felt so good.

So here’s to next year! ( oh forgot OH has a leave ban from mid June through to September due to the Olympics…………………..Ok I think he feels a sicky coming on already……………………….ssshhhhhh don’t tell anyone!! LOL

Yes you read it right…..camp! We are off again, tomorrow in fact. Now there’s lots of festivals going on over the summer with great bands, brilliant music, lots of alcohol, playing how to find your tent at the end of the night etc, etc…….you get the picture.

So when we heard this festival being talked about and advertised my OH and I looked at each other, a plan hatched and tickets were booked. Now being in our early 40’s we are not hitting a mid life crisis and pretending we are younger than we are, or trying to be ‘hip and down with the kids’!! So before you all get very impressed thinking we are heading to a Glastonbury style festival and that we must be really cool and laid back parents to be taking our kids off camping ‘a la festival
style’……………………….we are not!

So although we may at some point over the weekend re live our youth, embarrass our kids with our dancing, and force them to wave luminous Glo sticks at any sad songs whist singing ( very out of tune) at the top of our voices……………………………………we will not be cheering to any ‘cool’ bands of recent years!

Oh no, not this family. We will be heading to Henley, hoping for sunny dry weather. For a whole weekend we will be surrounded by luminous clothing, mullet wigs, legwarmers (and that’s just me……only kidding!) as we will be at the REWIND festival. A full 2 days of 80’s bands, beer in plastic glasses, people in our own age range who remember these bands and the words to their songs, and OK I might have to wave a few Glosticks!!

So wish me luck as Friday brings a long day of packing, unpacking, hawking everything to our pitch, erecting a very large and heavy tent (actually that will be OH and the boys), cooking dinner(that will definitely be my job) and then dragging our boys to the delights of the ‘Silent Disco’!!!!!

I feel a nervous breakdown approaching very rapidly!! Or at least a body breakdown after a very bad M.E day today!!!!!!
So lots of coffee, berroca’s and energy drinks I think………………………..and that’s before the Saturday and Sunday of fab 80’s music!!!!!