We were lucky enough to be invited to HMS Belfast on Thursday to see the new Gun Turret exhibit that is opening on board. 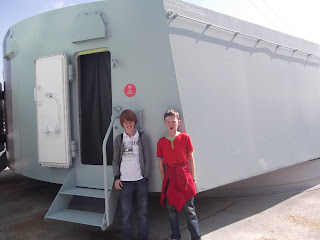 I arrived with my 10 year old son and his best buddy on a beautiful sunny morning to be greeted with tea and pastries and a press pack with all the information about the exhibit and HMS Belfast itself. We were then guided along to the exhibit which actually does take place within one of the ‘gun housings’ themselves. we went in and a black curtain darkened the inside. There is only room for a couple of families at a time in there so the children were encouraged to move forward to the front. A short film started to play with the story told from the perspective of a serviceman on board the Belfast in time of war. It takes you through what would happen in the run up to the guns being fired, with the workings moving and getting prepared. The experience culminated in a reenactment how it would feel to be inside there if the guns were fired, so loud noise, floor shaking and some smoke too. The boys thought it was great!

I am told that this film will be running on a timed loop for visitors to enter and watch during their visit. There is no extra cost to this so once you have paid your entrance fee everything then on board will be included. With this film on a constant loop it would be something that you could watch a few times on your visit if your children enjoy it.

Afterwards we were taken to the Operations Room where there are a couple of hands on games they can play. It consists of touch screen maps were the children or adults use ships and helicopters to search for aircraft wreckage on a timed game. The two boys loved this and were very disappointed by a ‘Mission Failed’ on their first attempt!! 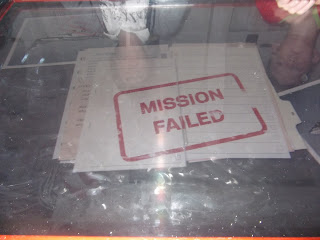 Then we moved into the front control room with the Captains chair complete with uniform and hats for the children to try on, and two very helpful guides who encouraged the boys to put the coats and hats on and got them searching for different things to spot out of the window with the old sets of binoculars! The boys were in their element.

We were then offered a guided tour around the ship or the chance to explore by ourselves. The boys opted to investigate the rest of the ship using the guide map. We went from the very top to the very bottom and had great fun on all the levels along with the child friendly hands on displays.

Word of warning……go sensibly dressed in trousers and don’t wear flip flops!!!! Not that I did, but there was a lady with her son there who had great difficulty in a maxi dress and sandals, going up and down the very steep ladder/steps!!!

Although I went round with two gun mad boys who seemed to love everything about the ship I didn’t feel that this would be a trip exclusively for boys. There were lots of girls on board who seemed to be having just as much fun. There is also a fab little cafe on board for that necessary thirst quenching cuppa for the adults, but if your budget doesn’t run to extras there is an area just as you come on board where lots of families were indulging in their picnics too. 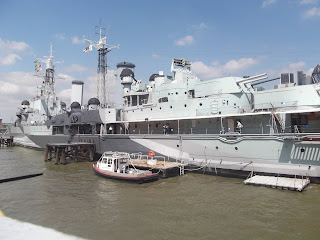 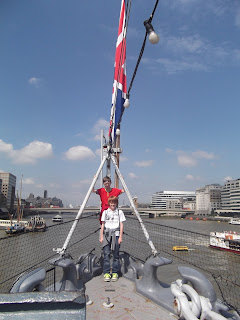 As with most London attractions, visits don’t come cheap with an adult ticket @ £13.50 and a child @ £5.50. However don’t be put off as there are lots of 2 for 1 offers when travelling by train, and if your child is lucky enough to be the proud owner of a Blue Peter Badge ( yes they are still going!!) they will get in free!!

SO CHECK OUT THE GREAT AND EASY COMPETITION BELOW FOR FREE TICKETS!!

Just as an extra there is a competition running for a family to win tickets to HMS Belfast with the opportunity to be aboard when the fire the guns for real!!!!

To enter the prize draw, readers just have to email hmsbelfast@fidopr.co.uk and the winner will be selected at the end of July.