I thought that with the start of the school holidays I would have so much more time to do…………things, chill out, catch up on a bit of telly, blog amongst others.

HOW WRONG COULD I BE!

I cannot believe that we are into the second week of the school holidays already. In fact a slight panic has set in, have I actually got enough time to do everything. My eldest has already been and returned from his week long scout camp!! We are heading off tomorrow to my MIL’s caravan along the Kent coast until Monday, as hubby now has a few days off work (thank God!). Now my boys are pestering me to go to their Nanny’s, who happens to live in Devon, which would be fantastic but I’m not sure I can drive that long on my own ( due to the M.E sometimes my muscles are extremely painful and an almighty fatigue can set in). We also have a festival in the middle of August and I haven’t even thought about uniforms ( apart from my eldest’s new blazer……….which I never forget after leaving it into a dry cleaners once only to wake up middle of the night on the day he was due back to school, in a total panic about what to do!!! Believe me my OH was not best pleased as I almost gave him heart failure thinking someone had broken in!!)

Anyway, last week was great with one child away it was great to spend time with the other on his own, and boy did he have his week planned out. OH was off Monday so my son decided he wanted to visit St Paul’s Cathedral in London!! So naively we thought great a little afternoon up there, we would listen to the tour gadgets and take a few pic’s and then home…. 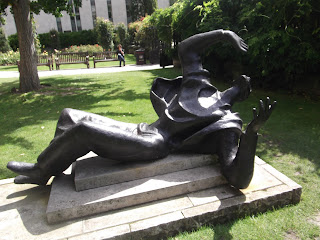 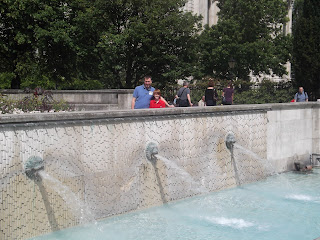 Oh no were there for 5 hours!! Yes you read it right………5 hours. They convinced me to go up the stairs to the Whispering Gallery, which I really wanted to do anyway. However, then they persuaded me to go further to the Stone Gallery! Which turned out to be fantastic as it was a beautiful day so we sat and had our lunch there!

Then they persuaded me to go a bit further, to the top in fact. From there we had just the most fantastic view across London, so I felt it was worth it in the end.

However, I started to struggle coming down and after several rests I got to the bottom only to find my legs started shaking uncontrollably and I was stuck to the spot for about 15 minutes!!!! It was sooo not funny, bad enough when people pass you on the stairs and look at you as though you are a complete pleb for not being able to get up there, let alone how people look at you when your OH is practically holding you up in the middle of St Paul’s!!( M.E is invisible so people look at you as if your are an idiot when your OH helps you up or holds you up for whatever reason). We made it to the cafe to recuperate …………a cuppa and a chocolate crispy cake is like a miracle cure.

Then a purchase in the shop ( I very sadly collect fridge magnets from wherever I go) and a snoop in the Crypt and we then being practically thrown out we had been there so long. 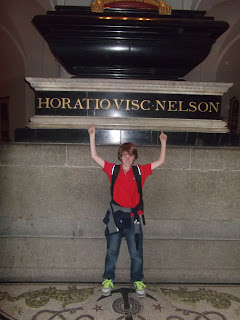 When I thought it was all over my son casually mentions going across the Millennium Bridge ( which is practically in front of St Paul’s) so I plodded on.

The day was fantastic although I knew I would suffer the next day.

So on Tuesday my OH took over and the pair of them built a ‘den’ in the garden while I watched from the sidelines taking pic’s and drinking tea.

Wednesday my Oh returned to work so I promised my son that we would use our prize from a competition and go play our free round of mini golf at Bluewater. That was great fun until my son beat me by 2 points!!! I was so not impressed………I’m not one of those lovely parents who let their child win at things. I don’t know what happens to me but a competitive streak takes over and not an inch is given.

However, I consoled myself with a Krispy Kreme and a coffee before letting my son window shop around Bluewater to get a few ideas for his birthday.

Thursday, I had a lovely invite to HMS Belfast which you can read about in the previous post. So little ol’ me and my son and his buddy spent a fab few hours on the ship before returning home. He then was invited to his friends for the afternoon ( his mum is a start and knew I would be heading to bed after a busy morning out) and didn’t return until dinner time!! 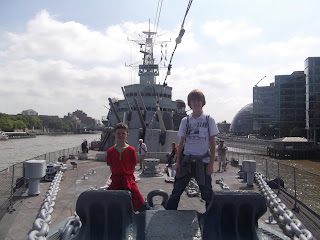 Friday was a meet with a friend at the pool, boys went swimming we had a coffee and then went back to hers for lunch and a great catch up in the afternoon!!

By then I was completely drained so Saturday was a complete blur to me and spent most of it in bed. But my eldest returned from his camp very happy but tired!!

This week had already started with an impromptu water fight yesterday afternoon and a swim ‘play date’ with their friends this afternoon. 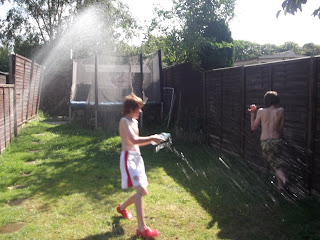 We will be off to the caravan tomorrow but I’m yet to get everything packed and I am sitting on the computer doing this!!!!!
I’m waiting on the magic fairy to come in the night and sort it all out for me……………….OK that means I will be up late and then not sleep as I think of the things I have forgotten to pack!!! Meanwhile my lovely boys (including OH) will sleep fantastically well as they only have to remember to put on clean pants……and sometimes that’s a struggle.

So here’s to a few hopefully relaxing days away where I am hoping my OH will take over the ‘entertaining’ of the boys for a while as I sit on the sidelines and recuperate a little in readiness for the next few weeks!!!